In a two-day hackathon on structured journalism and network mapping organized by Graph Commons at the Chamber of Architects in Istanbul, participants created semantic network models on topics in the field of human rights, civil society, and journalism. They created network maps as well as built data tools that compile relatively big data from available sources and turned them into graph databases in order to map and analyze the complex issues at hand.

An important outcome of the event was the initialization of the rights data protocol, an open data structure scheme that could enable information flow particularly between civic research projects in order to prevent recurring data work and reinforce their impact. It would also decentralize civic research data by moving it between applications and projects. No need to say, such a protocol can only flourish when used by many constituents. More on this later.

Below is selected work from the hackathon with short explanations, links to interactive maps, photos, and screenshots.

We started the brain storming sessions with hackathon mentors including journalists and academics who work in human rights. Following the data models came out of this session, participants created data compiling tools and used the Graph Commons API for generating graphs and mapping relationships.

All tools listed below are open source and available on Github. Contact their respective developers if you’d like to contribute.

TBMM scraper – Set of tools that extract data on parliamentary processes from the Turkey parliament (TBMM) and generates a “bureaucracy graph”. Developed in Node.js by Ahmet Kızılay with contributions from Ufuk Kayserilioglu.

Onerge Crawler – Scrapes tbmm.gov.tr and collects “parliamentary questions” (“Soru Önergeleri”) and turns the relations between Ministires, PMs, Political Parties, and Questions into a network map. Developed in C# by Kerem.

After the hand drawn graph data models, participants worked on creating a variety of network maps through manual data collection as well as programmatic data generation. Then the interactive maps were discussed and published on the Graph Commons platform.

For questions and comments you can contact the authors of the graphs below. 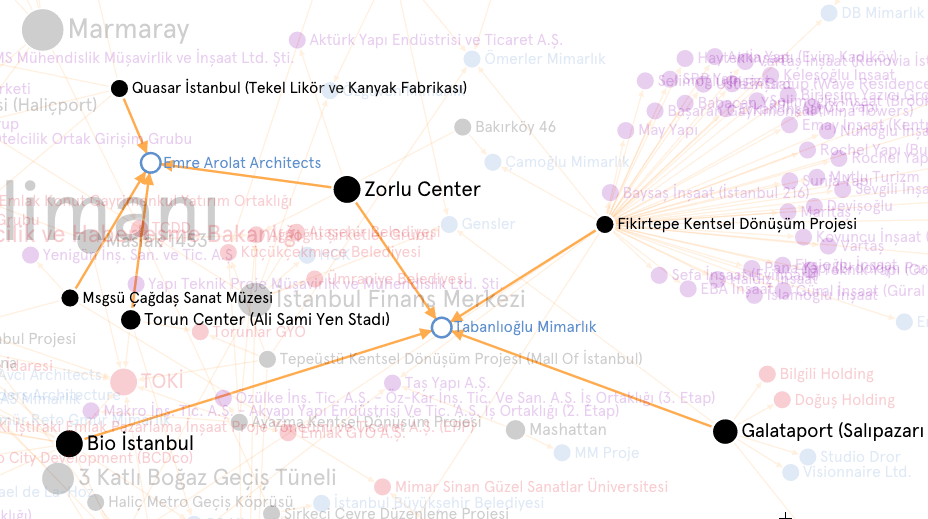 Mega İstanbul graph is generated by scraping the megaprojeleristanbul.com data. The graph contains 103 Construction Site, 92 Project, 88 Architecture Firm, 90 Contractor and the relations between them. Project node size is by investment size and the Contractor node size is by degree centrality. Created by Yakup Çetinkaya. 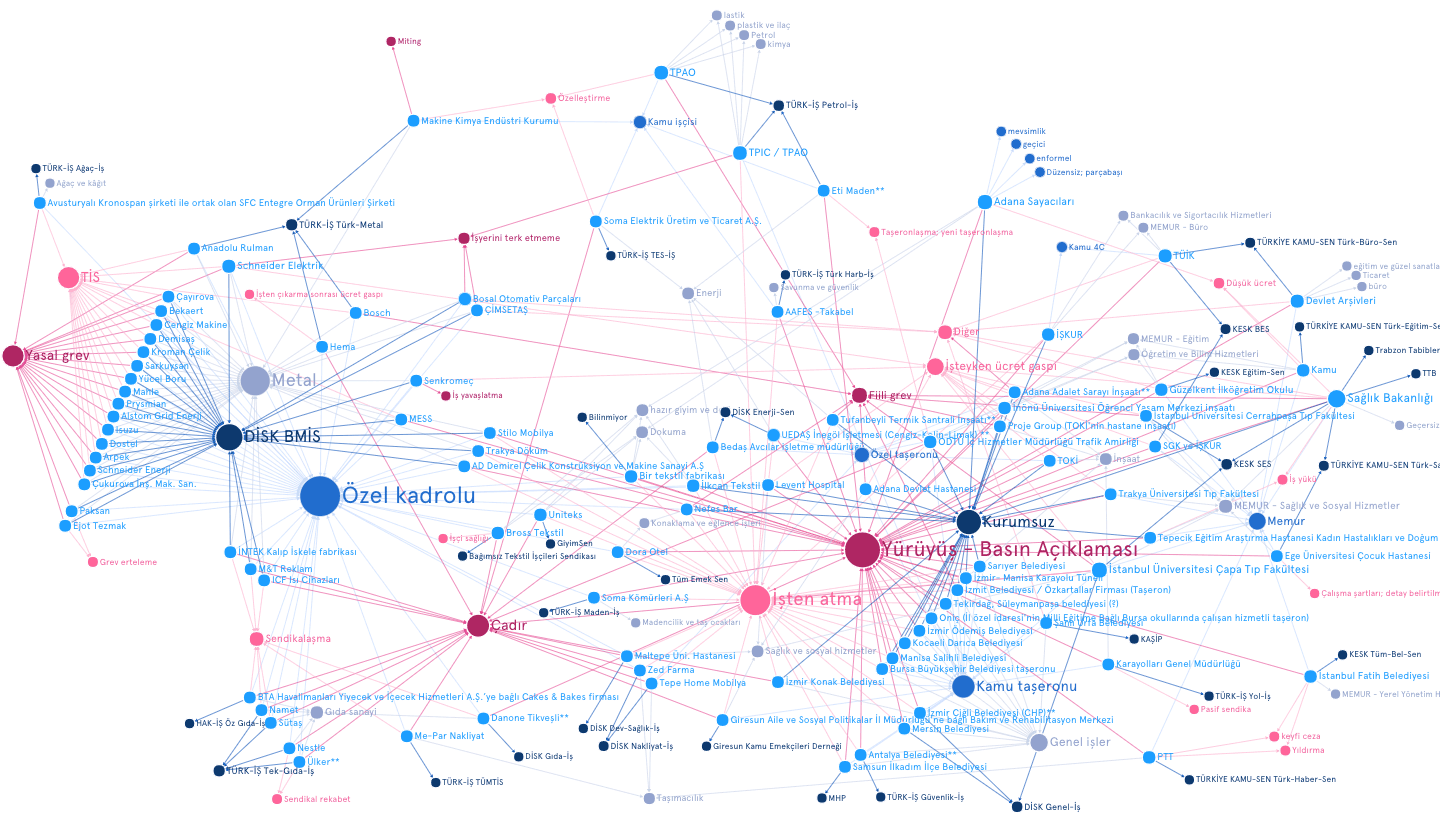 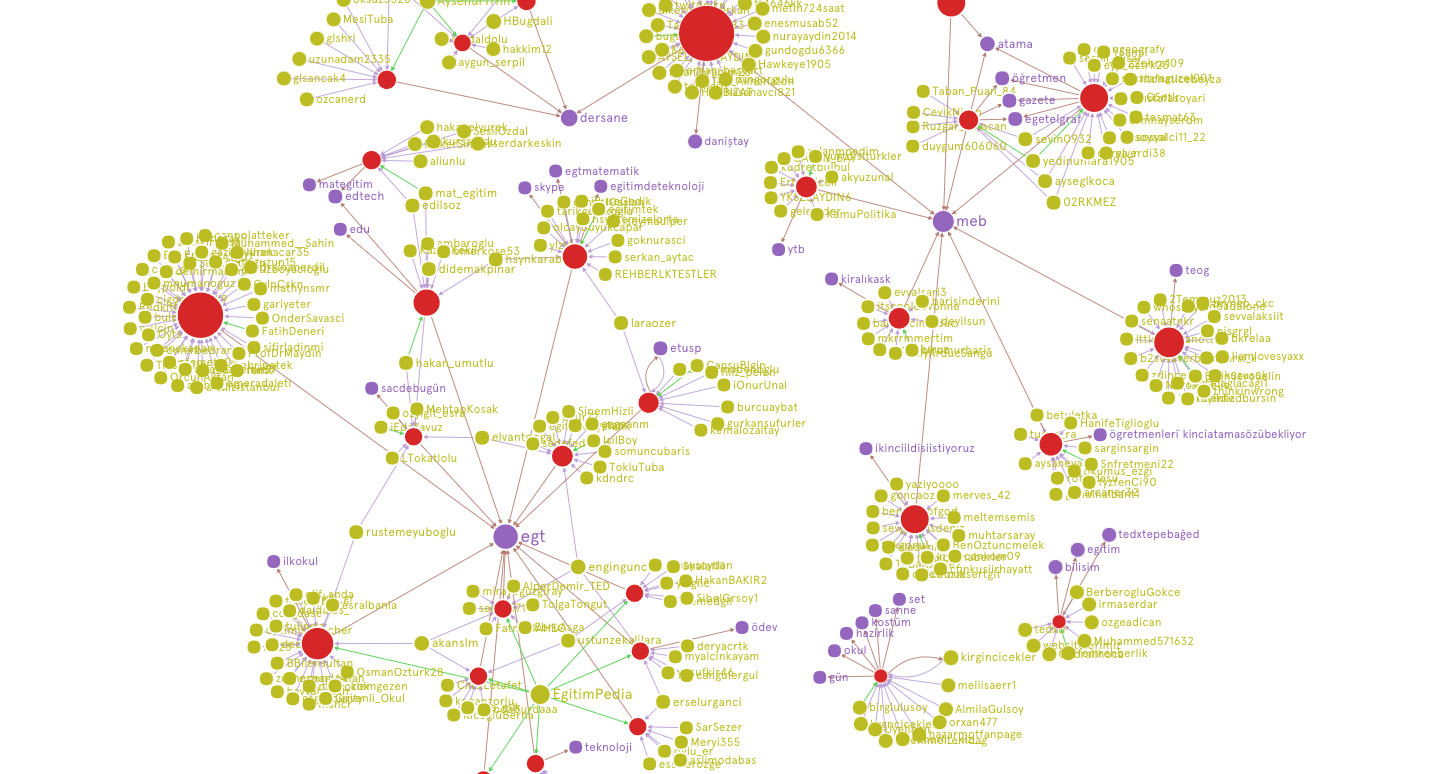 The #EGT hashtag graph is the map of a hashtag on education reform, and its use case on the Twitter network. It contains 324 User, 33 Tag, 29 Tweet and Tweeted, tagged, retweeted relations in between. Created by Mehmet Ataş.

Map of Femicide 2010 in Turkey 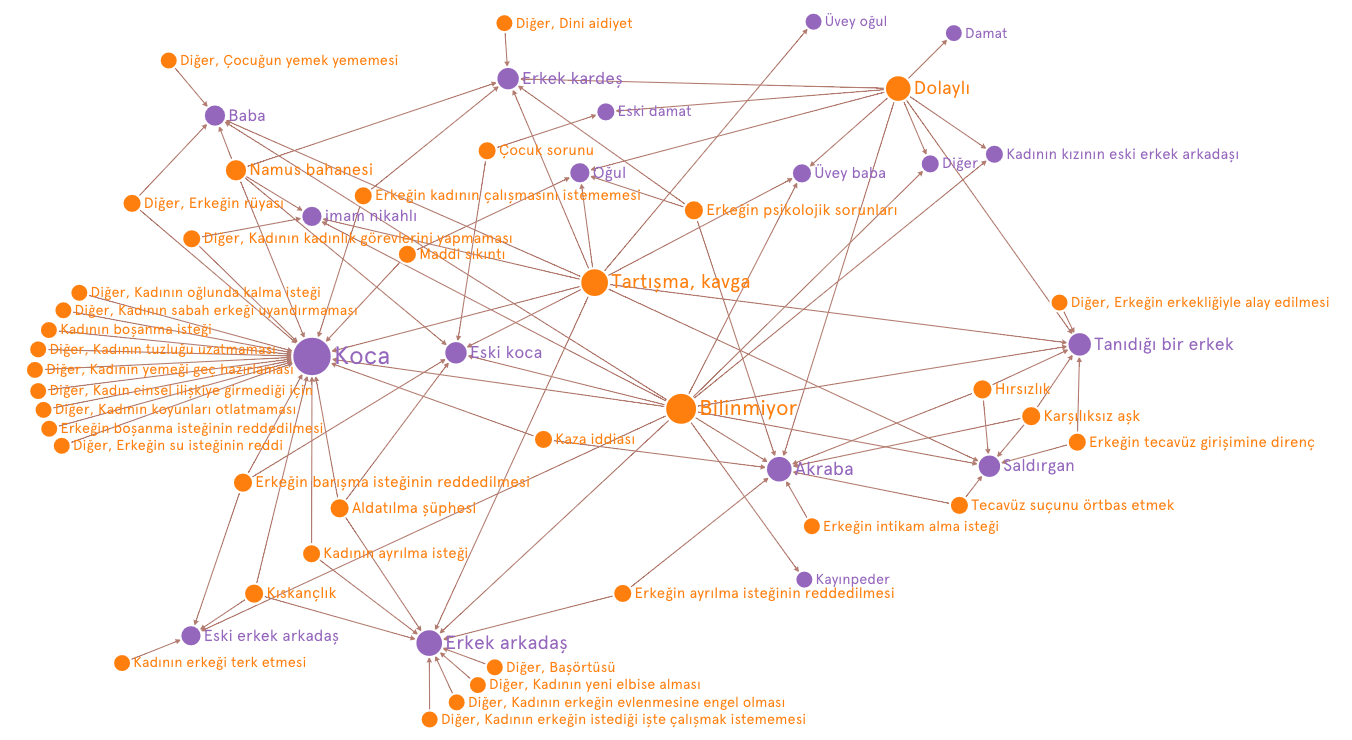 Map of Femicide 2010 contains 38 Cause and 18 Perpetrator of women who lost their lives due to domestic violence. Data used from Bianet and the map is created by Sevil Seten.

The network map of the Monument Counter, an online monument to commemorate women who lost their lives due to domestic violence. The map contains category co-occurence relations between 1330 cases (99 Perpetrator, 46 Method, 132 Cause) collected from anitsayac.com. Map generated by Yakup Çetinkaya. 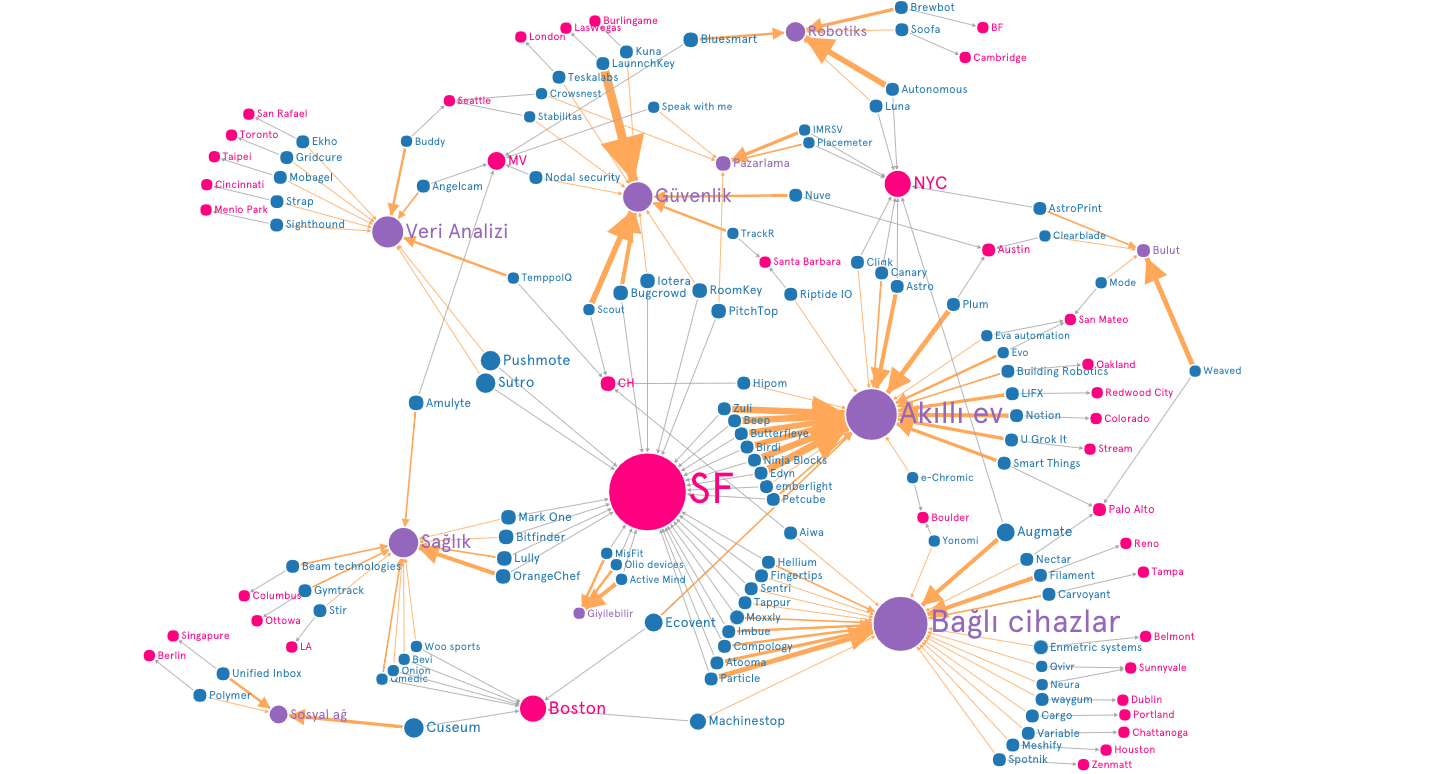 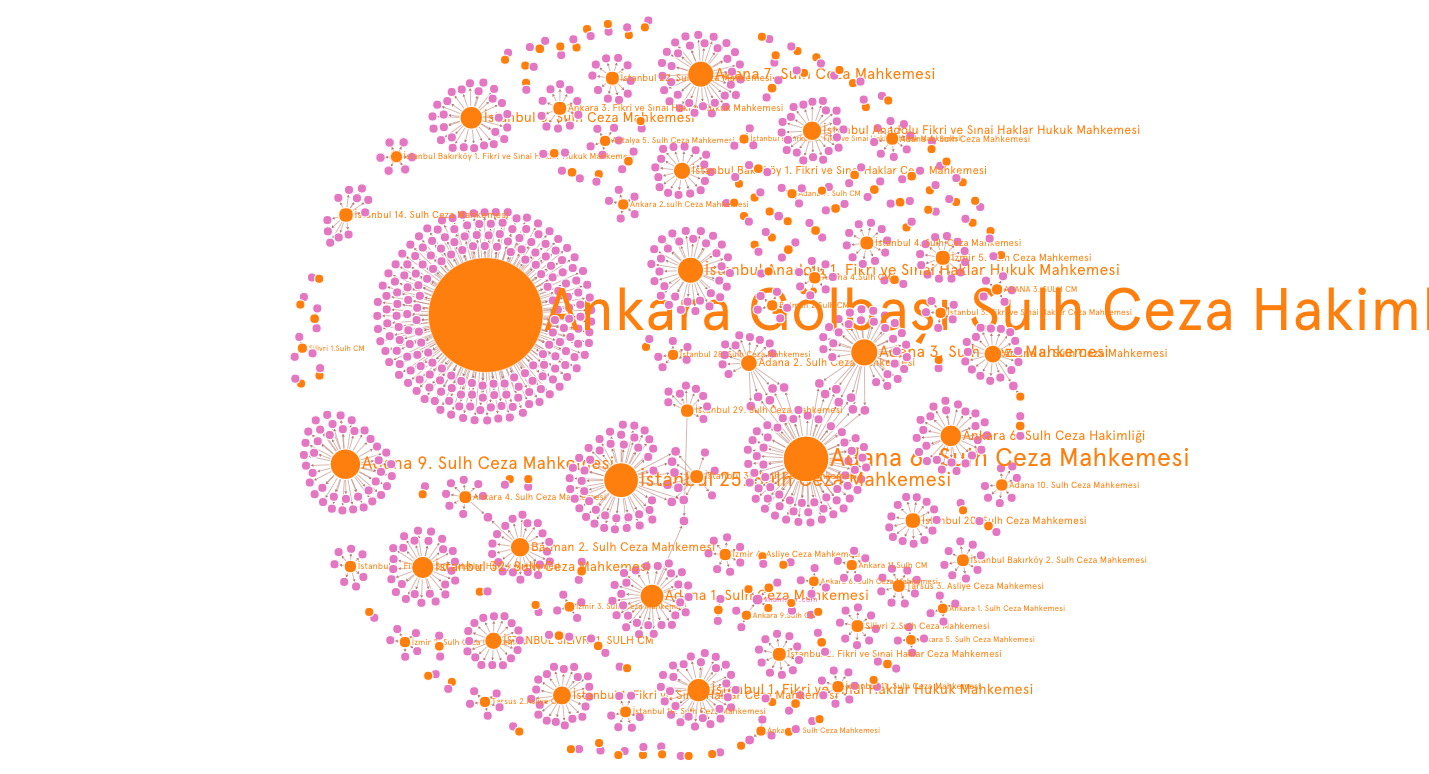 Internet Censorship Graph contains 1061 Website and 161 Court connected by the court orders. Data used from engelliweb.com which is a loose source for tracking Internet cencorship in Turkey. The graph is created by Ceyhun Enki Aksan and Raldu. 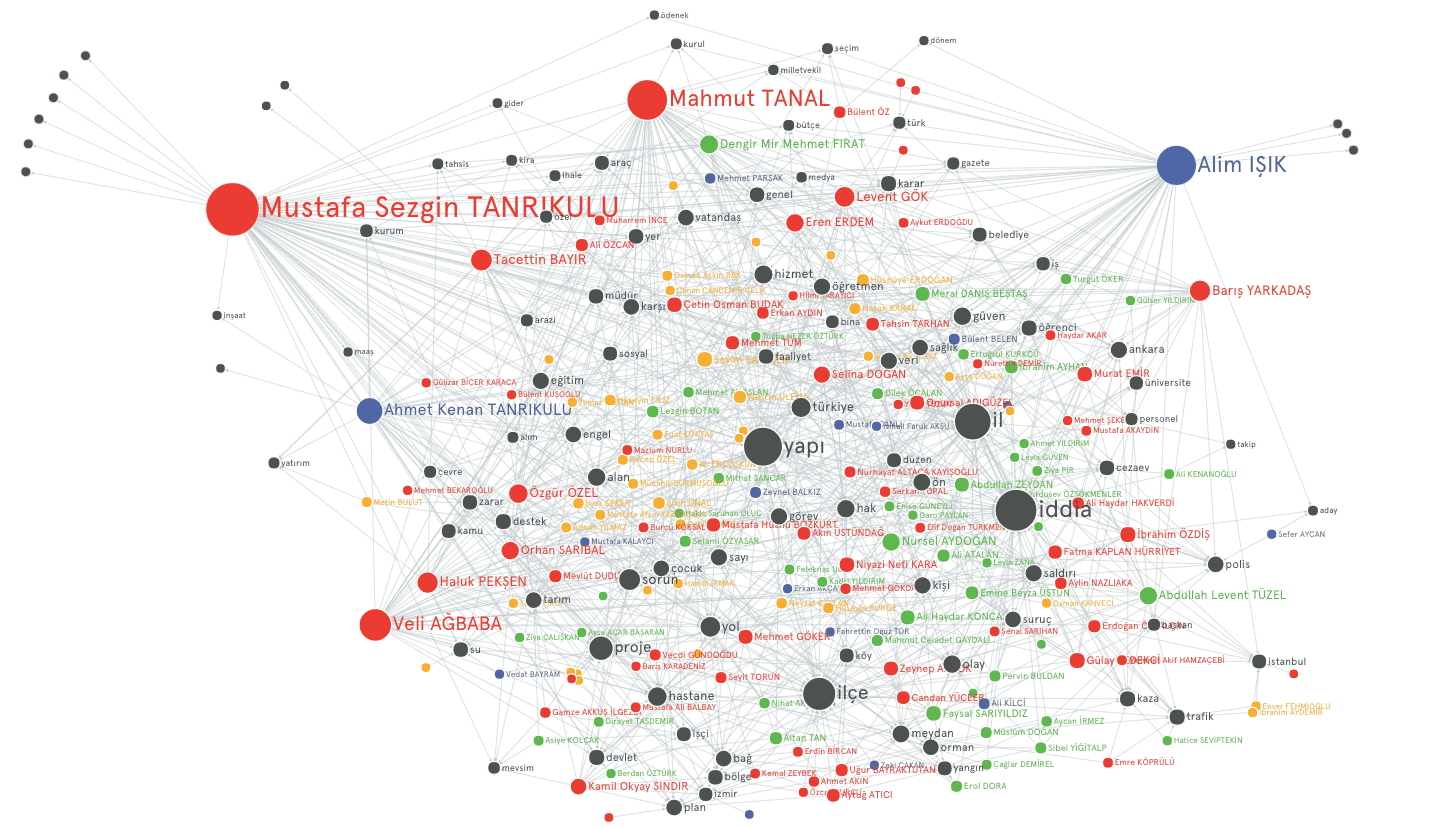 Parliament questions graph is a map of PMs’ use of certain topics in their question at the parliament. It contains 16 MHP, 49 HDP, 40 AKP, 70 CHP, and 100 Topic. Both the data and the map is generated by Ufuk Kayserilioglu. 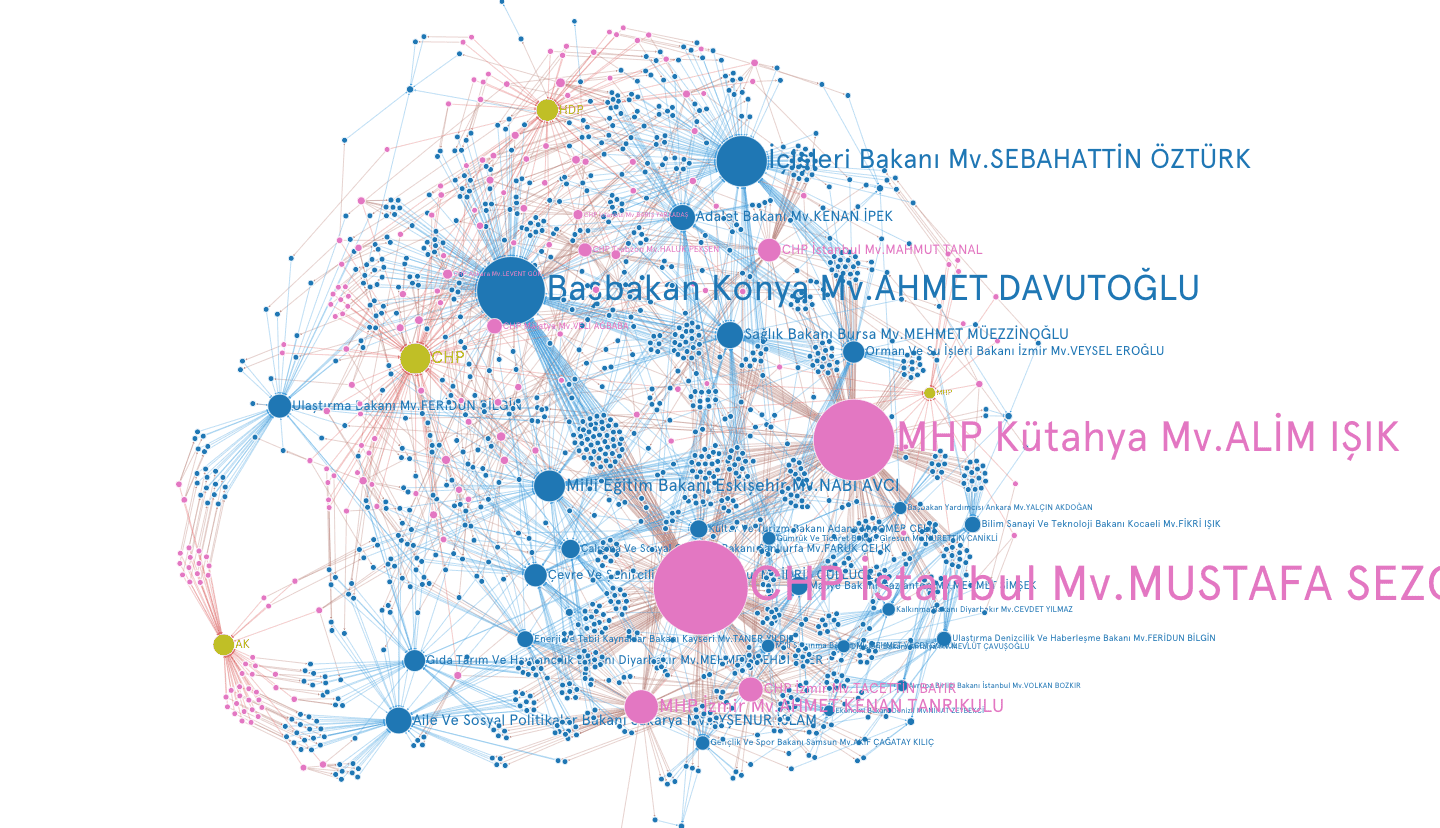 The ministries and parliament questions graph contains 33 Ministry, 4 Party, 1211 Question, 189 MP. Both the data and the map is generated by Kerem. 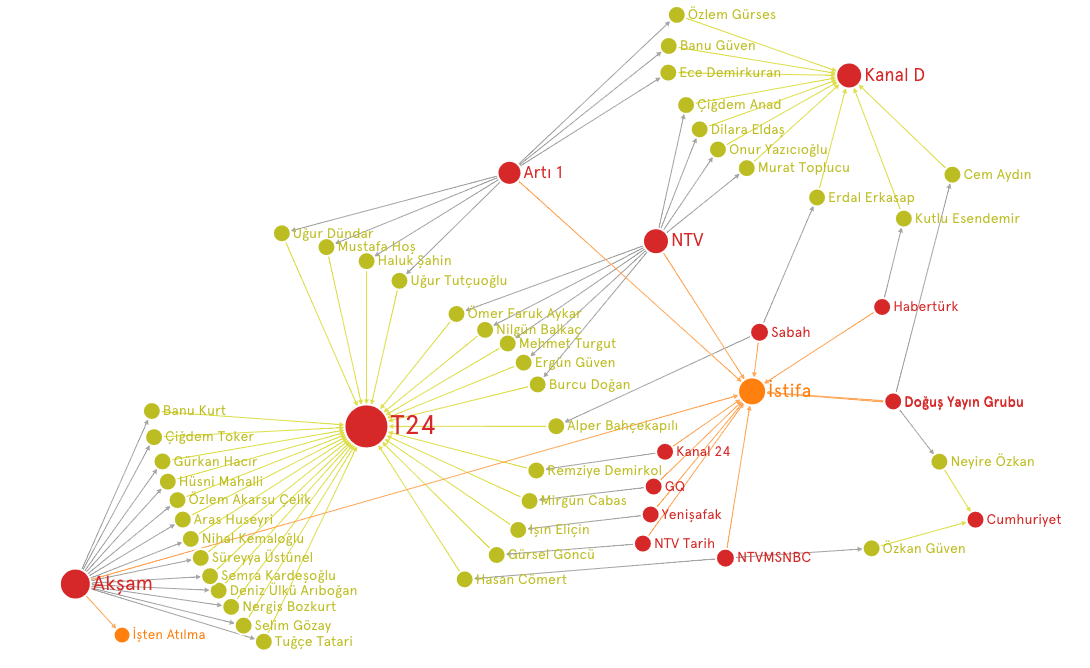 Fired Journalists graph contains 40 Journalist who lost their jobs due to increasing government pressure after 2013. It also maps the journalists’ relations to their new jobs at certain media firms. Data compilation and mapping by Mohan Ravichandran, Kerem Başkaya, Osman Başkaya. 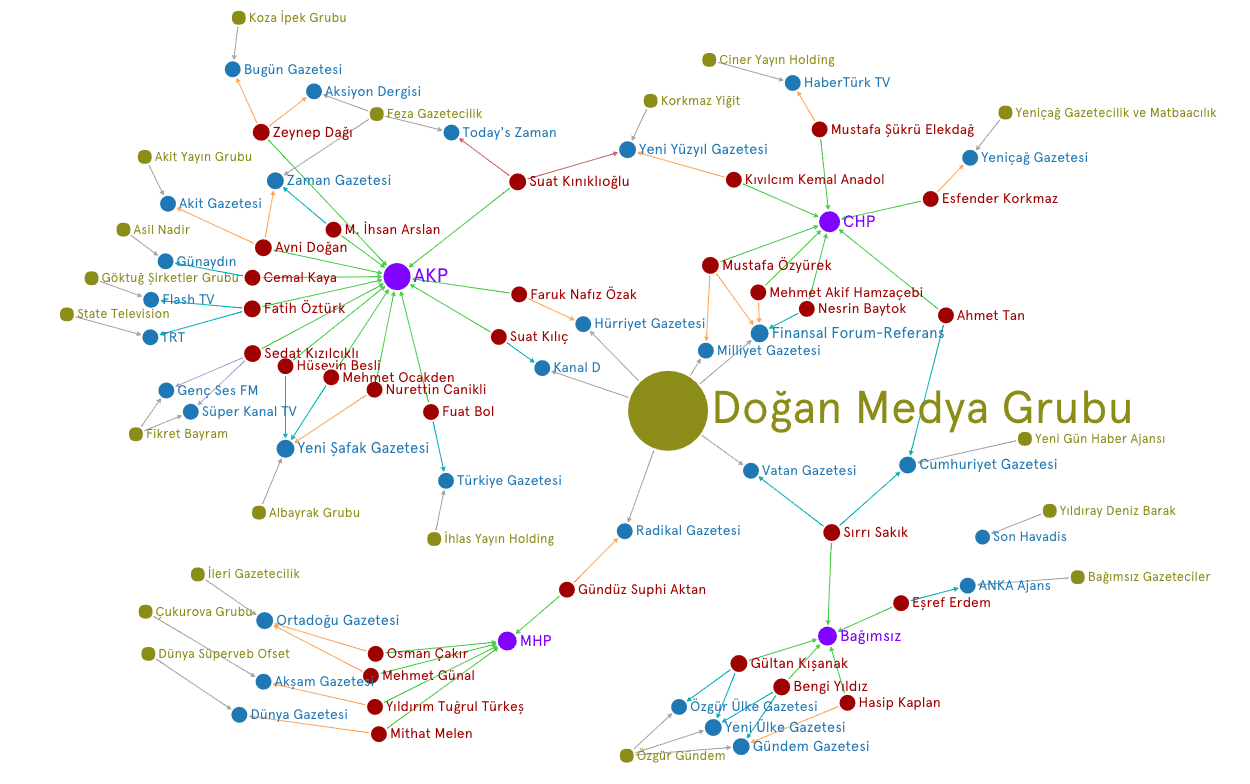 Journalists who became a PM in the 23rd Parliament in Turkey 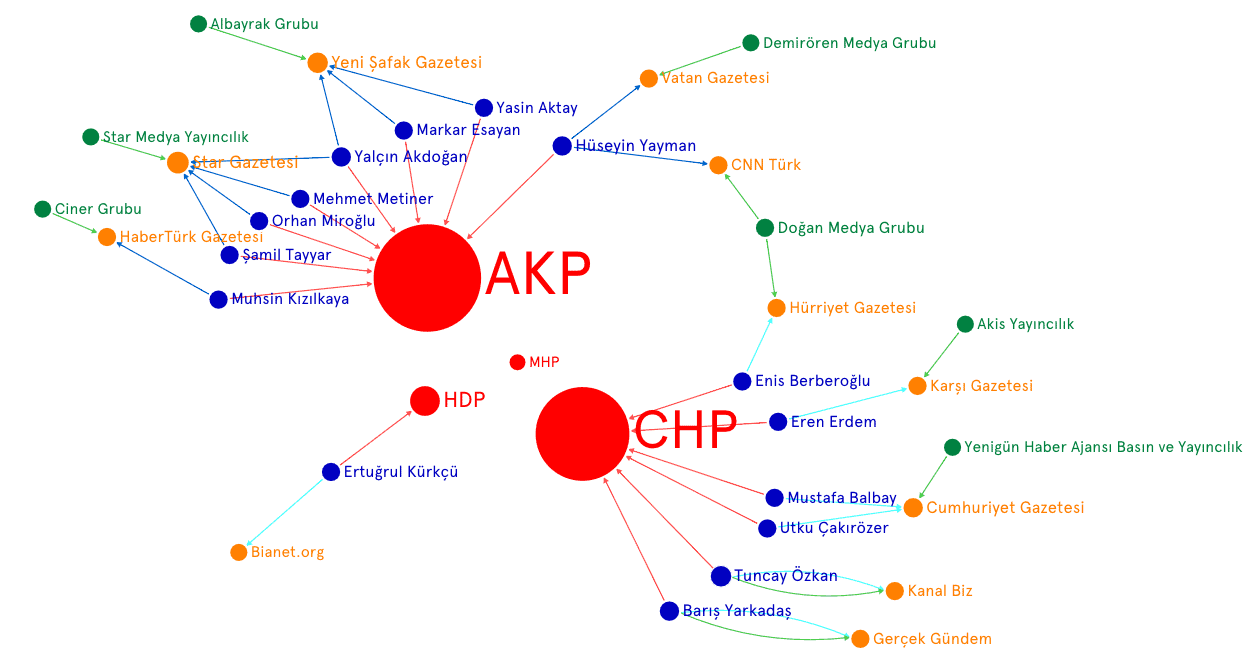 Journalists who became a PM in the 25th Parliament in Turkey

Maps contain journalists who became a PM from a party in the parliament. Data collection and map generation by Atınç Gürçay, Sidar Bayram, Dygu.

Moments from the Hackathon 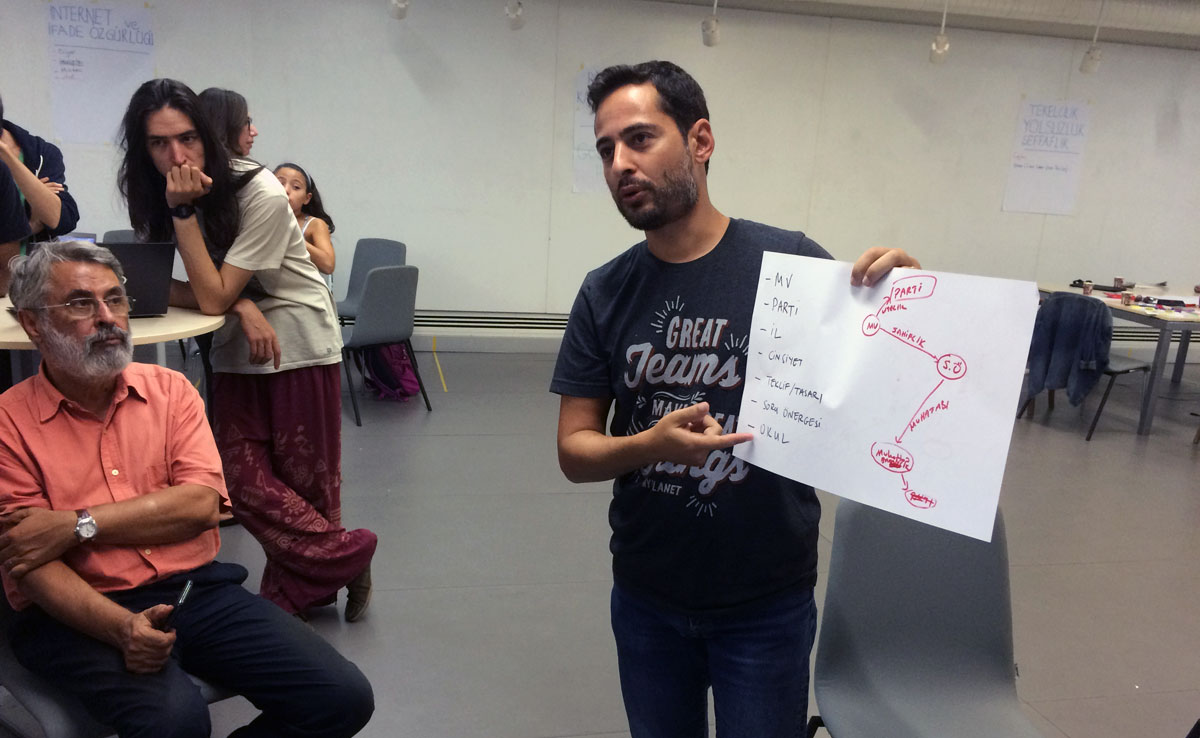 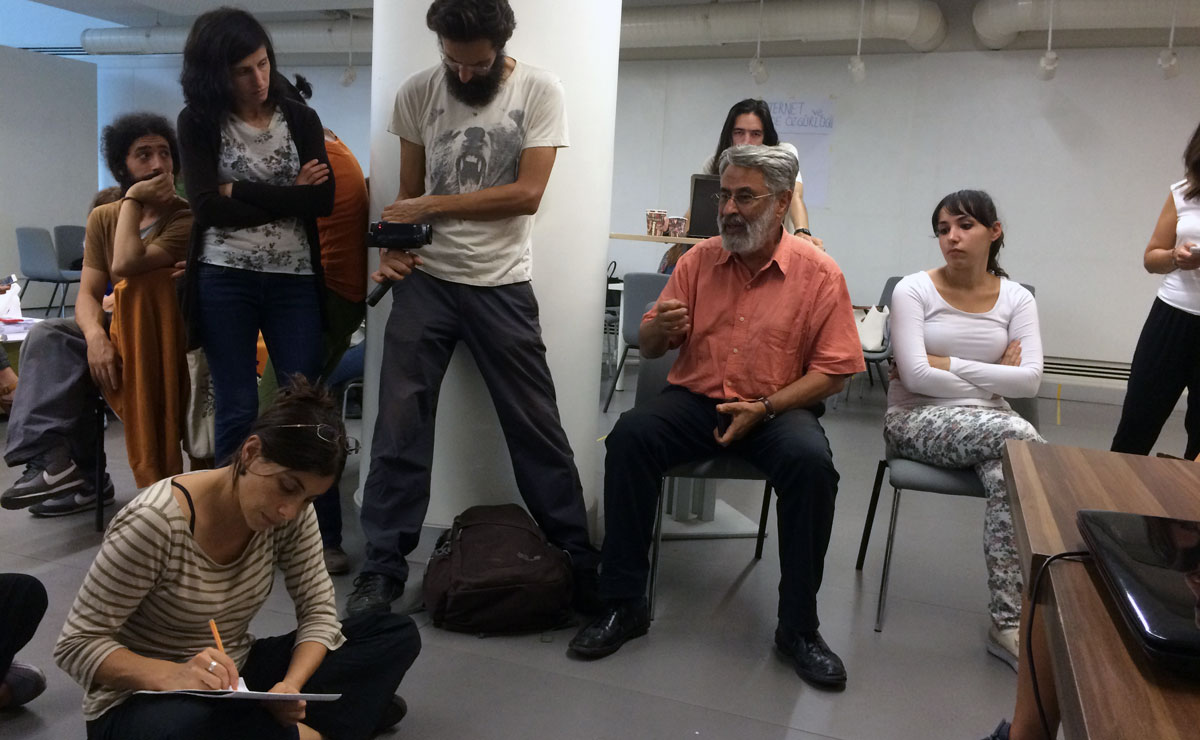 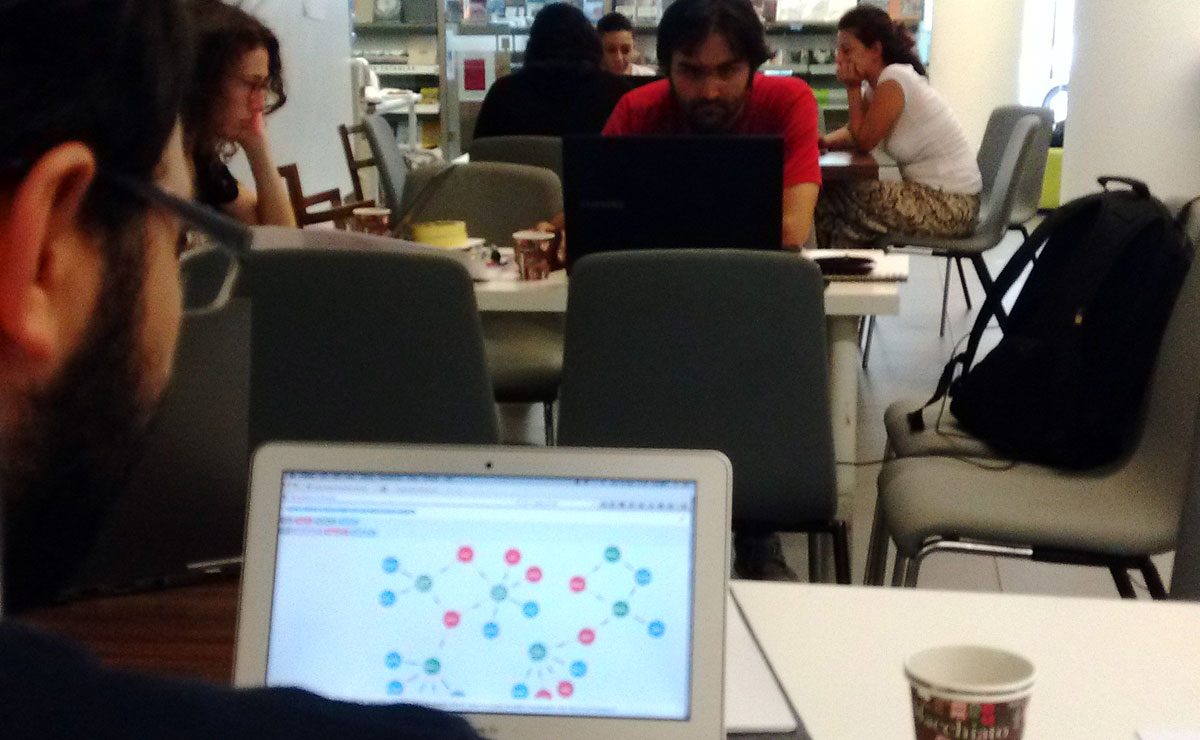 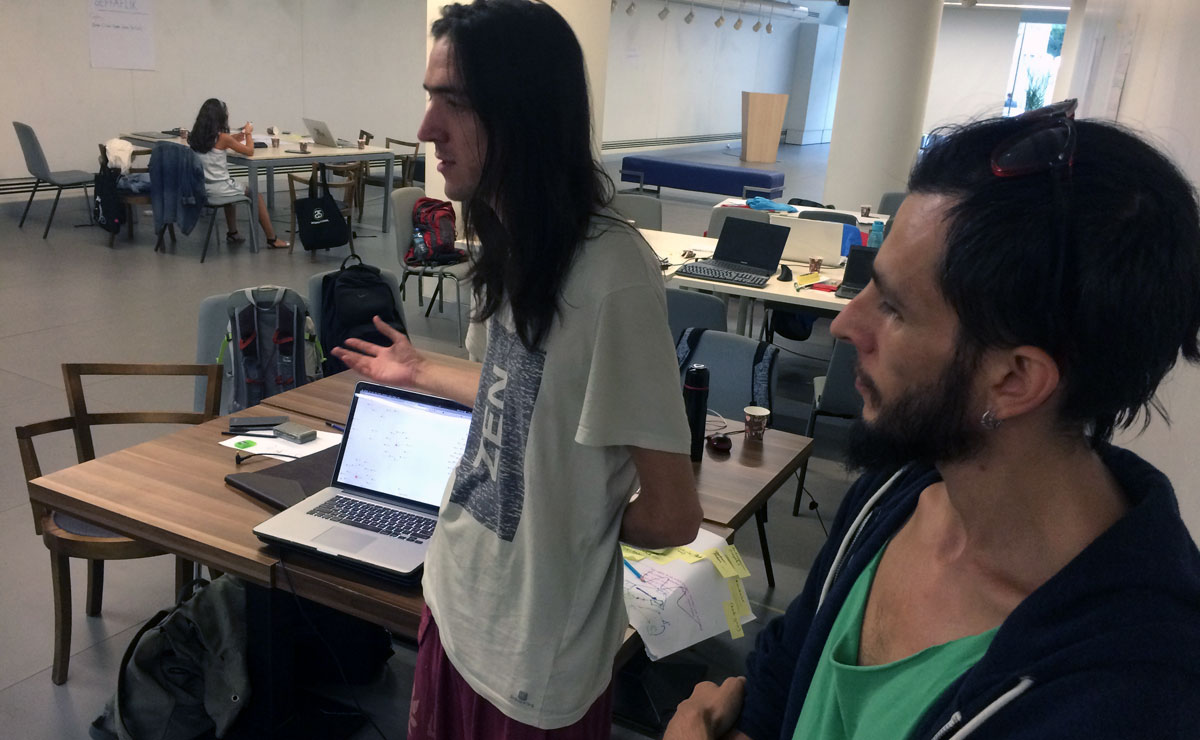 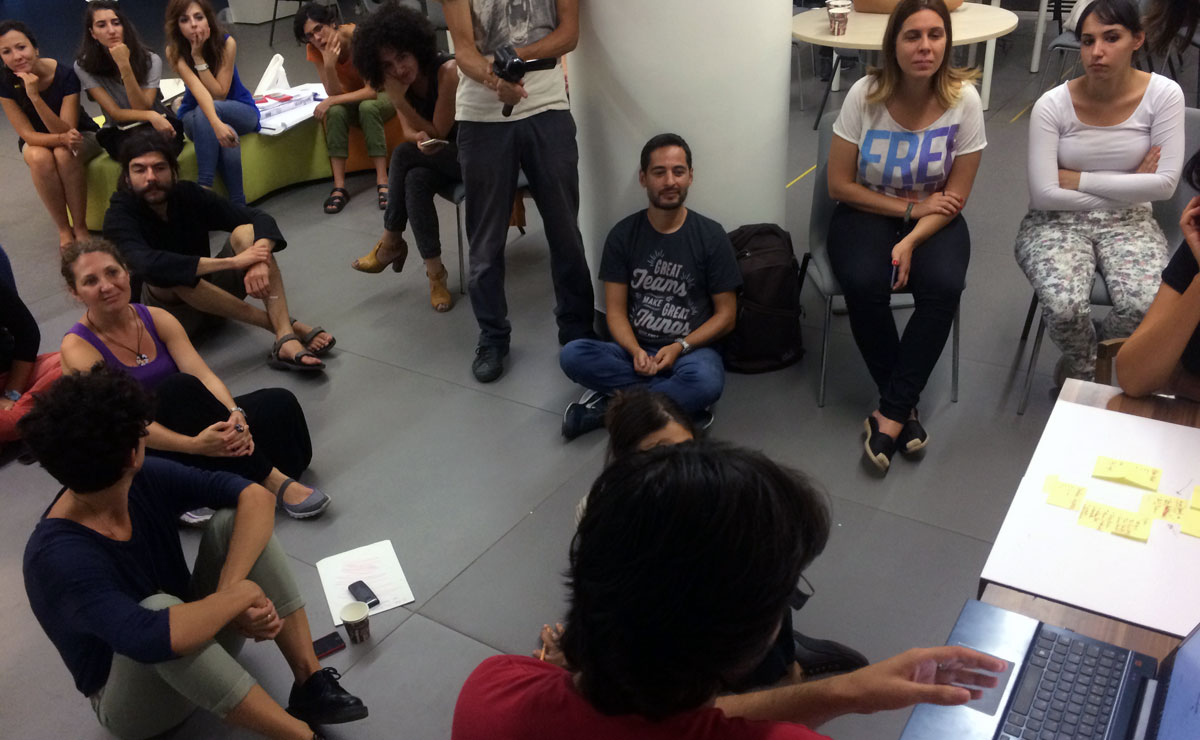 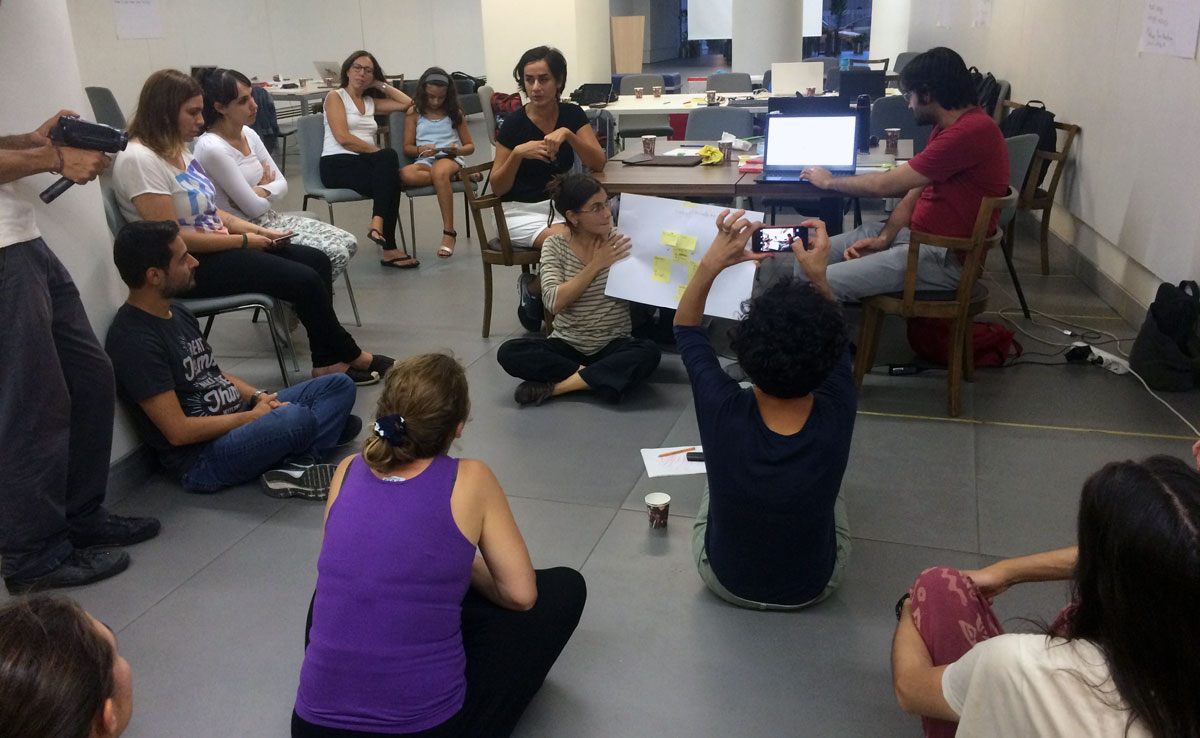 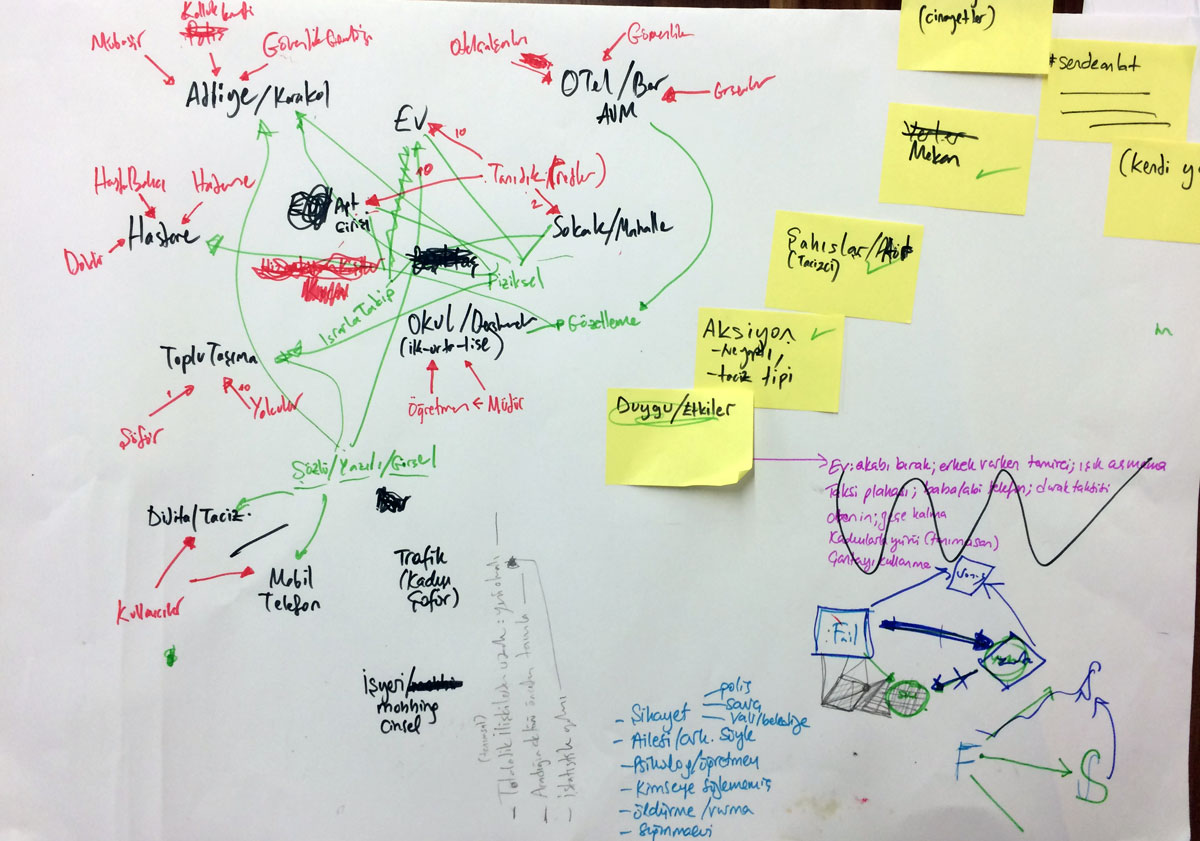 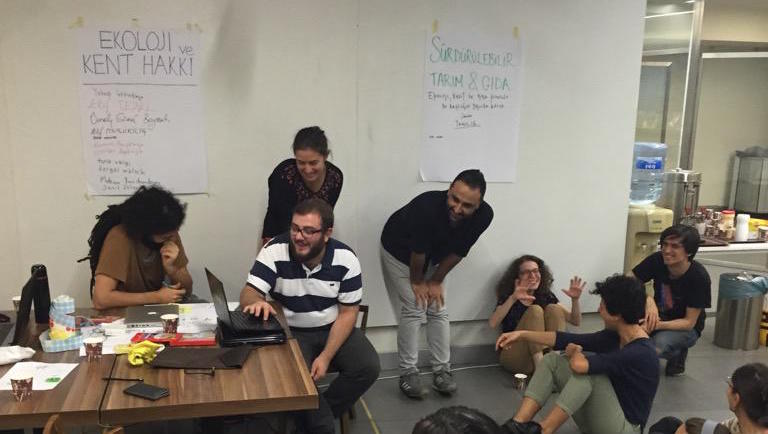 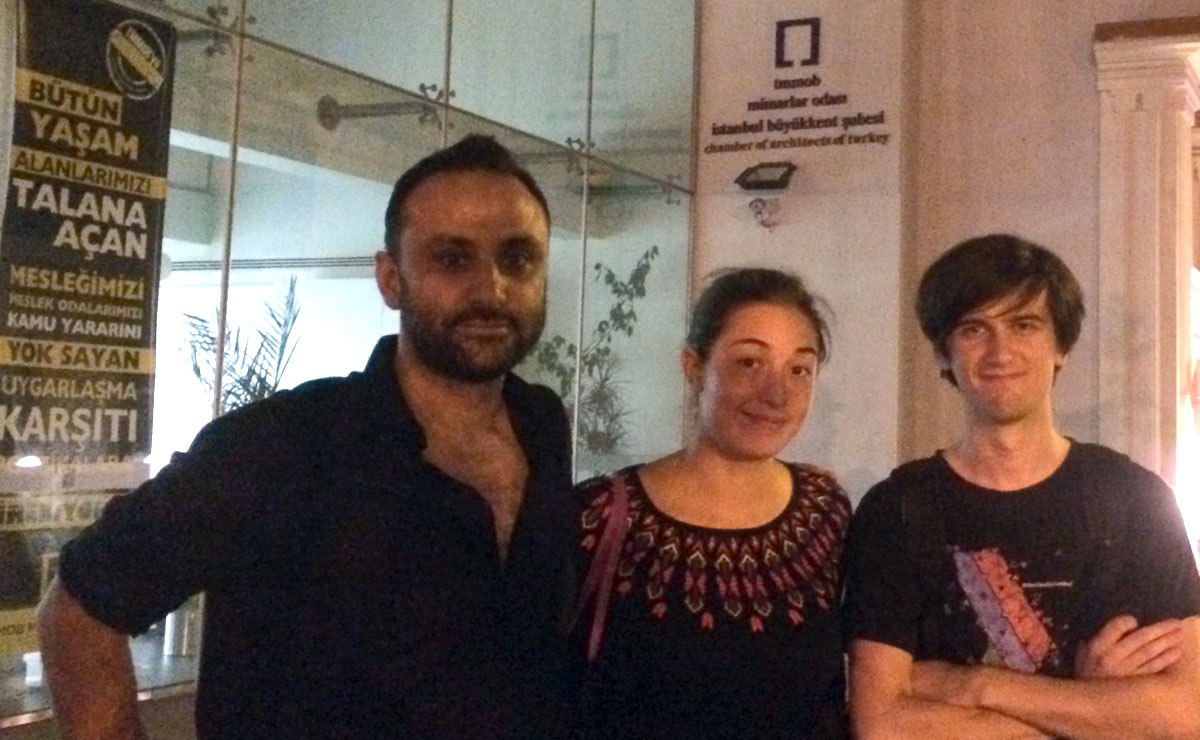 This event could not be possible without Ayça Aldatmaz and Ahmet Kızılay’s labor, and without the participating mentors. We thank you all. Also we thank you İmre Azem for the video documentation and Serdar Paktin for disseminating the announcements.

We are grateful to Chamber of Architecture for hosting us._

Photograph on the top of the page is by Gülay Özkan.